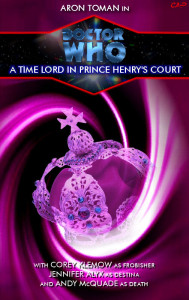 ‘Doctor, I don’t believe it! How could you be against love?’

Whilst making repairs to the TARDIS, the Doctor takes his companions for a holiday at an old farm in sixteenth century France. Frobisher isn’t impressed – he’d much rather be on Florana than on Earth (again) in a time before they even have electricity. Destina, on the other hand, is finding the time period fascinating. Having been brought up on Gallifrey, she’s never been exposed to such things as ‘apples’ before…

However, Destina soon finds something that holds her interest far more than any fruit could do. The palace of King Francis I of France is nearby, and Destina manages to catch the royal prince, Henry, stealing their horses. But royal thieving aside, Destina sees something in the prince, something she’s never seen in anyone else before. So when the Doctor announces he wishes to go to court to visit an old friend of his, Destina insists on tagging along.

But why does the Doctor seem so against Destina associating herself with the royal Prince? And who is the dark stranger, who is keeping such a watchful eye on the time travellers? Will this love story end happily ever after?