A Cause For Carolling 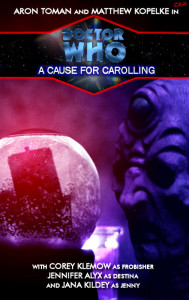 ‘I’m going to spend my Christmas with a Dalek, Doctor! No matter how many of you try to stop me!’

Sick of the distinct lack of attention the Doctor’s been giving her since they left Brisbane, Jenny decides she wants a holiday. However, their plans are cut short when the TARDIS receives a mysterious distress call. A poor girl called Destina is in desperate trouble, her friends are in trouble and she needs the Doctor desperately to help them. Who are the ones in trouble? The Doctor is, of course…

A time paradox has been started, and despite knowing what it could do to the web of time, the Doctor makes every attempt to rescue his future self. But could two versions of the Time Lord battle the power from beyond the dawn of time that’s being wielded here? Or will this paradox become even more complex than either could ever have imagined…

This Christmas themed adventure features the special guest appearances of Matthew Kopelke and Jana Kidley reprising their roles as the Doctor and Jenny from BTR Productions.