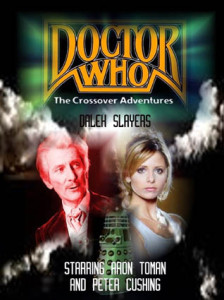 After an encounter with the Daleks on the Muppet Show, the Doctor follows them to their base – Earth, late twentieth century in a small town called Sunnydale in the USA. The Doctor soon learns that this is a regular hang out for vampires, only kept in check by Buffy, the Vampire Slayer.

But the vampires are the least of the Doctors worries, as he soon encounters a strange scientist who calls himself Dr. Who…