Education of the Daleks 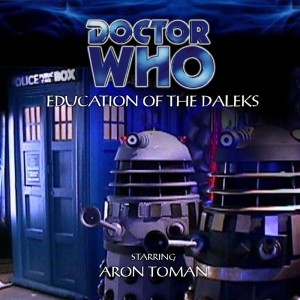 ‘Anybody can be taught. Everyone can learn, even these Daleks here. And I’ll show you how it can be done.’

In his secret lair on a hidden planet, Davros has been attempting to perfect the construction of a new race of Daleks. With them, he will continue his plan for universal domination, and attempt to enslave the galaxy. However something has gone wrong, and Davros’s new creations have become childlike, rather than war-like, hardly suitable for universal conquest. Although, for some reason, the Doctor has arrived, and apparently is willing to help Davros teach his Daleks the basics in galactic warfare.

What is the Doctor up to? Is he really helping the Daleks to destroy the universe, or does he have another plan up his sleeve? All will be revealed, in an adventure which can only be described as … educational.

This adventure, written for a university assignment, was designed to appear as if it were a part of a children’s educational program. It discusses (very simply) various academic theories on learning.