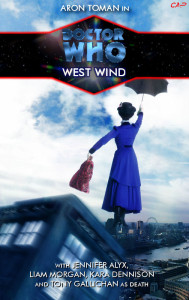 ‘Wind’s in the east, mist comin’ in
Like something is brewin’, about to begin.
Can’t put me finger on what lies in store,
But I fear what’s to happen all happened before…’

Frobisher’s gone. The Computer vanished. Astra’s been away forever. And even Destina wants nothing else but to return to Gallifrey, leaving the TARDIS, just like the rest of them. Everybody leaves, the Doctor says. And so does he.

But even though the Doctor seeks a quiet retirement in the cast of the West End production of Mary Poppins, the universe doesn’t seem to let him escape. Who is the phantom voice plaguing the performers of London’s Prince Edward Theatre? What do the evil, alien warlike Persecutors want at the theatre? And will Death finally reveal the reason he has followed the Doctor across the spectrum of space and time?

With an army of alien Persecutors on the doorstep, and a temporal rift opening just off centre stage, now more than ever does Earth need a Doctor. But time has run out – for him and for everyone – and soon he will find out exactly what it means to die on stage…

Written and Directed by Aron Toman
Incidental music by Richard and Robert Shearman, and George Stiles and Anthony Drewe
Theme composed by Ron Grainer and arranged by Vandark
Post-production by Aron Toman and David Nagel
Cover Artwork by Aron Toman