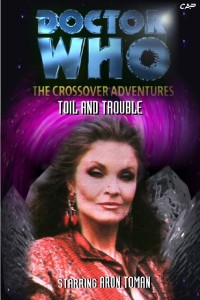 ‘Wake Duncan with thy knocking? I would thou couldst!’

The TARDIS takes a horrendous buffeting, and the Doctor fears the worst. Is it Callisto, escaped from her Time Warp or the Master after finding a way off Terserus? No, it’s merely Astra’s Computer, one that seems to have linked up from her home planet of Pendor and infested itself into the TARDIS’s systems.

Despite it’s somewhat annoying personality, the Doctor soon realises she’s the least of his problems. The TARDIS has landed in 11th Century Scotland, at the castle of the famed Macbeth, soon after his murder of King Duncan. Toil and Trouble aplenty, after all, who needs cackling witches when the Rani is posing as Lady Macbeth?

Doctor Who © British Broadcasting Corporation. No copyright infringement is intended.