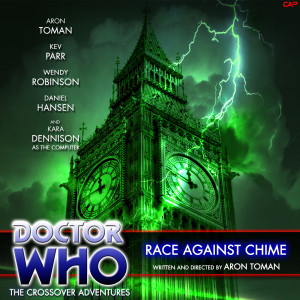 ‘You must not let the bell chime!’

July 1859, and all of London has descended upon the Palace of Westminster to see the installation of the Great Bell, the largest bell in the world. At last, the houses of parliament will be complete, when the infamous bell rings in its new clock tower for the first time. It is a glorious time in the British Empire, for Victorian London and for History itself. Well, according to the Doctor anyway. The Computer is just bored.

But while the Doctor hobnobs with Sir Benjamin ‘Big Ben’ Hall, First Commissioner of Works, the Computer discovers a mysterious gypsy woman with an odd ability to tell the future. Who warns that the Great Bell must never be struck, lest it bring about an apocalypse for the entire world!

Is the gypsy woman to be believed? Will the world end on the chimes of midnight? With the mysterious behaviour of the bell’s designer, and the disappearance of the master of the foundry where the bell was forged, the Doctor finds his visit into history soon becomes a frantic race against chime…