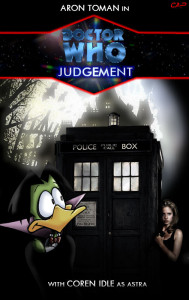 Welcome to Castle Duckula, home to a dreadful dynasty of vicious vampire ducks – the Counts of Duckula! Although they can be killed just as easily by a local slayer, this breed of vampires can be brought back to life by simple spell which can be performed once a century when the moon is in the eighth house of Aquarius. The latest reincarnation, however, did not run according to plan… After all, should vampires be sweet, vegetarian and play the harmonica?

Buffy the Vampire Slayer doesn’t think so, as the Doctor tries to hold her back from slaying the Count, knowing that sometime soon, Judgement will need to be made…