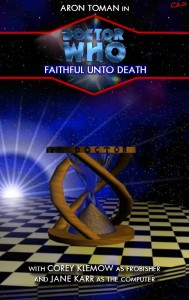 ‘I’m a Time Lord, not an anthropomorphic personification!’

Feeling homesick, Astra has left the TARDIS to return to her home planet, leaving the Doctor to travel alone through the universe. Alone, except for Astra’s Computer of course.

The TARDIS soon drifts to the edges of the universe, where the Powers that Be have become bored with the very fabric of creation. Either that, or became drunk on the day they invented a planet made up of a disc sitting on the back of four elephants that stand on a giant turtle (sex unknown) swimming through space in an orbit no one’s very sure about.

However, all is not well on the Discworld. Death has gone missing – again – and his position is dying to be filled. For some reason, whoever is in charge of this place has decided the Doctor seems a the perfect shape to take Death’s place. Reluctantly, the Time Lord takes the scythe and does the duty.

In an adventure full of wizards, witches, dwarfs, trolls and a penguin, can the Doctor find the real Death before he’s trapped in this job forever?