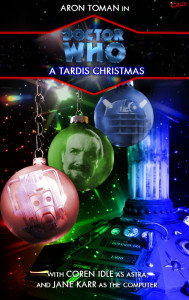 ‘Christmas is for celebrating, not for certain doom!’

‘Twas the morning of Christmas, and all through the ship the tinsel was glistening, the tree-lights were lit. The Doctor had laid them with pride and with care, determined to celebrate and rest, if he dare. The Computer was helping, with songs and with cheer, her off-key warbling instilling some fear.

The console room door sprang wide with a clatter as Astra came in to see what was the matter. She didn’t agree with the Doctor’s joy, the holiday he loved she found to be coy. Christmas is fun, in theory alone, in reality people tend to look after their own. She wanted nothing of it, she’d rather not sing, for Christmas really was not her thing. But before the Doctor could explain his case, the TARDIS was bombarded with monsters from space. Known as the Cybermen they turned up in droves to turn our dear heroes into Cybermen drones. But what was so strange, not that it was so wrong, but they threatened our heroes in rhyme and in song.

Is this a spell or the wrath of some god? Or will the Doctor find something even more odd? Is the Computer the one they should blame, and will the TARDIS systems ever be the same? As more monsters come and the Doctor takes flight, will he and his companions ever see Christmas night?